We are developing plans for a new city district in North East Cambridge, and the Area Action Plan will be the planning policy framework that guides this process. We have recently published the Proposed Submission Plan for consideration by councillors at both Councils. This includes our proposed revisions to the Plan following consultation on the Draft Plan in 2020. Read more in our news release, or visit the Proposed Submission Plan page.

What is the North East Cambridge Area Action Plan? 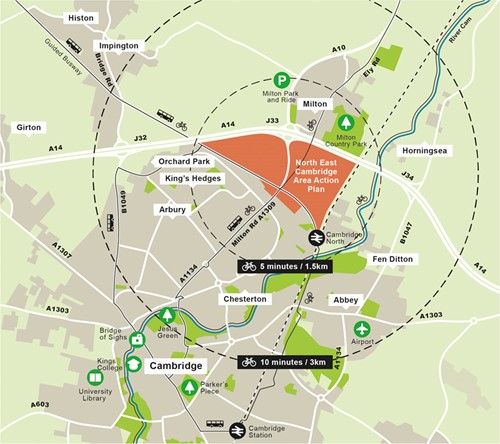 The vision is for North East Cambridge to be a healthy, inclusive, walkable, low-carbon new city district with a vibrant mix of high quality homes, workplaces, services and social spaces, fully integrated with surrounding neighbourhoods.

The area crosses the boundary between Cambridge City and South Cambridgeshire District Councils and the Councils are working closely together to ensure that residents and businesses around the area are informed and involved with how the area develops.

What have we done so far?

The Proposed Submission Plan has been developed following extensive consultation and evidence gathering over the past seven years. You can read about how the previous consultations have helped shape the plan in the Consultation Statement published in our document library.

The Communities Teams of both Councils run the North East Cambridge Community Forum, which is open to anyone to attend and find out more about all the different projects going on in the area.

The Area Action Plan was published in its Proposed Submission form and considered by Cambridge City and South Cambridgeshire District councillors through their respective committee processes.

The proposed submission version is effectively a final draft which the Councils propose to adopt. Prior to formal public consultation on the Proposed Submission AAP, the Councils will now pause the AAP process until a decision has been made on the separate Development Consent Order process for the relocation of the Cambridge Waste Water Treatment Plant. This is because the Area Action Plan is being prepared on the basis that the existing Waste Water Treatment Plan will be relocated off-site, which will enable this new district to come forward, and the Development Consent Order is an important part of showing that the Area Action Plan can be delivered.

Therefore it is currently anticipated that consultation on the Proposed Submission NEC AAP will take place around late 2024. The comments received at this stage would also be submitted to the Secretary of State alongside the Area Action Plan for consideration by the independent Planning Inspectorate as part of the examination in public of the Plan.

Have a look at our frequently asked questions webpage.