The need for new homes 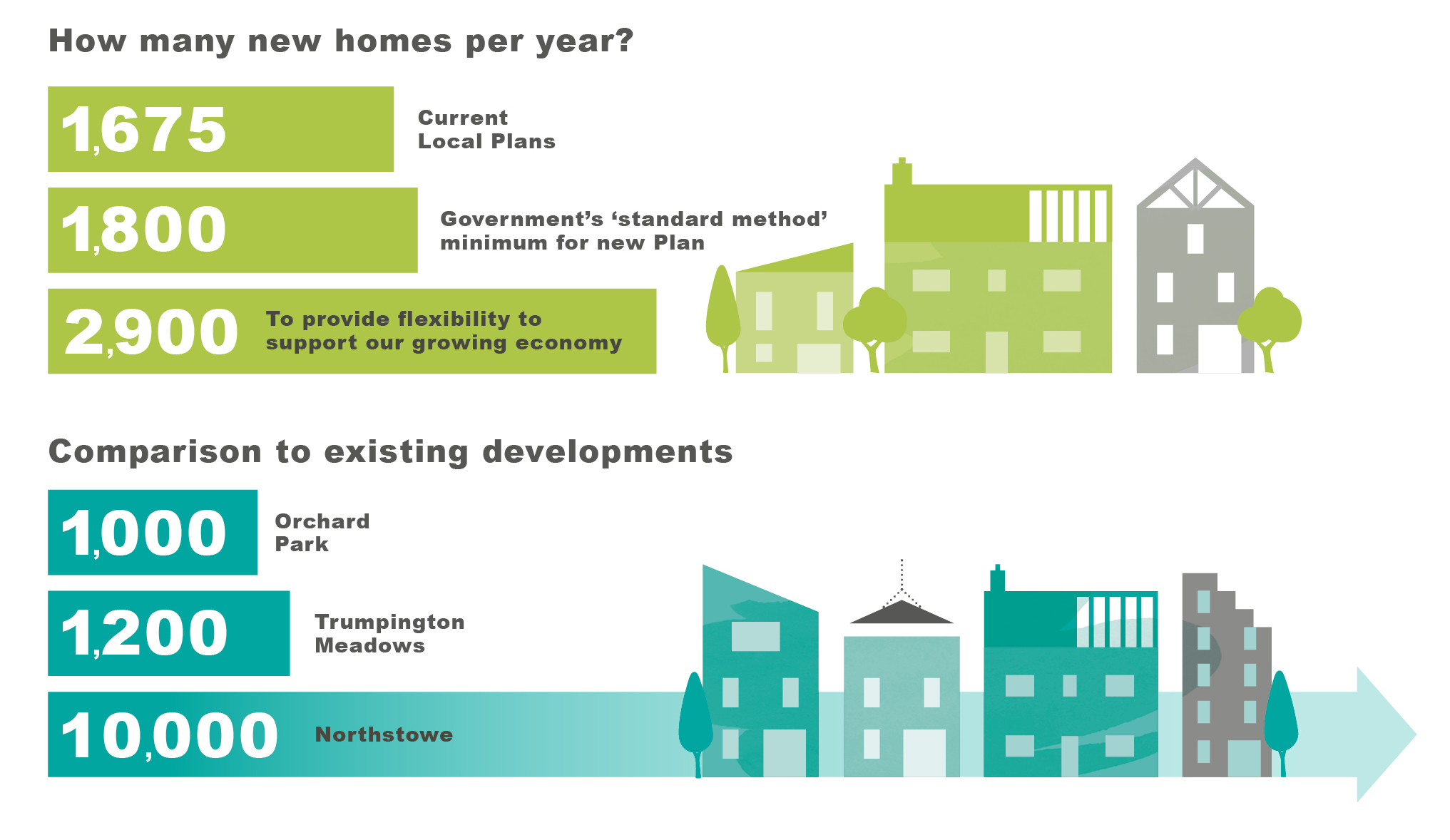 The next Local Plan (see glossary) will need to establish the number of homes required in the area. Updates to national planning policy have introduced a new way of calculating the number of homes needed to meet the needs in an area, referred to as the ‘standard method’. This method takes account of population growth and affordability issues. We need to plan for at least this minimum figure in the Local Plan.

Our current calculations using the Government’s ‘standard method’ (see glossary) indicate a need for 1,800 homes per year, or 40,900 homes for the suggested plan period of 2017-2040 – but these numbers will be updated as further data becomes available. If not enough homes are built to meet the ‘standard method’ target, planning applications for housing may have to be approved on sites that are in conflict with policies in the Local Plan.

When the Councils signed up to the Cambridgeshire and Peterborough devolution deal when the Combined Authority was created, this included the vision of doubling the total economic output of the area over 25 years. As set out in the Jobs theme, the Cambridgeshire and Peterborough Independent Economic Review (CPIER) showed that our recent jobs growth has been faster than expected, and that growth is likely to continue. As a result, demand for new housing in this area has been exceptionally high and housebuilding has not kept up.

While there is much more work to do on this, a rough indicative calculation based on CPIER suggests that if the jobs growth is achieved, around 2,900 homes a year would need to be built in Greater Cambridge (see glossary) – an indicative total of 66,700 homes over 2017-2040. This compares with the adopted 2018 Local Plans (see glossary)’ target of 1,675 homes per year, and 1,800 homes per year to meet local needs using the Government’s standard method.

With 36,400 homes already in the pipeline to be built between 2017 and 2040, if the indicative calculation above is correct, there may be a case for making additional provision beyond the local housing need derived from the standard method, described above. Making the additional provision that would provide flexibility to support our potential economic growth suggests identifying sites for around an additional 30,000 homes in the next Local Plan. This is subject to the further research we are commissioning and a decision on the jobs growth to be planned for. To give a sense of the scale of this potential additional provision, Orchard Park in the north of Cambridge is around 1,000 homes, whilst the total number of homes on the Cambridge Southern Fringe developments is around 4,000, most of which have been built. The new town at Northstowe when complete will be around 10,000 homes. Our current pipeline forecasts do not include North East Cambridge, for which the North East Area Action Plan (see glossary) is being prepared, or Cambridge Airport, which is safeguarded land for development in the adopted 2018 Local Plans (see glossary), and both of these may provide a significant number of new homes.